This is his 25th ranking of global PCB enterprise output value. Thank him for the valuable data he has provided for the PCB industry in the past 25 years.

1. From the perspective of subdivided products: the demand for HDI and Flex PCB is lower than expected, but the demand for high multilayer PCB and high-end IC substrate board is strong;

2. From the perspective of product application: the demand for mobile phones and automotive electronics is gradually released, and the demand for communication base stations, servers and computers is booming;

3, From the production area: output value of traditional PCB manufacturing countries such as Japan and Korea has been declining in recent years, but the Chinese mainland has continued to grow (the impact of the COVID-19 on 2020 will decrease globally, but then it will rebound).

PCB, commonly known as the printed circuit board, is the mother of electronic system products, covering 5G, cloud computing, consumer electronics, automobile, military industry, aerospace, and so on.

The upstream of the PCB industry

At present, in the field of copper-clad laminate, Kingboard group, which is listed in the Hong Kong stock market, ranks the first in the world, and Shengyi technology is the second. At present, the output value of CCL in mainland China has reached 65% of the world's output value, and the special copper clad laminate with high added value is monopolized by foreign factories such as Rogers, Taconic, and Panasonic.

The Midstream of the PCB industry 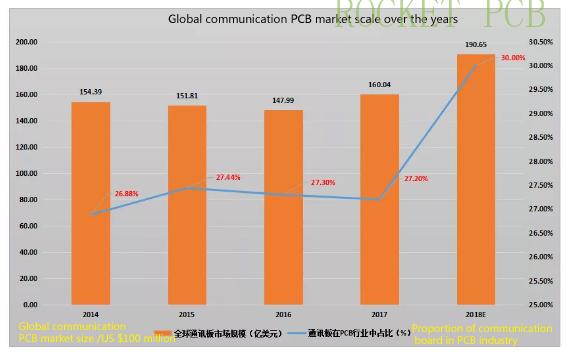 The downstream of the PCB industry

At the downstream of the industrial chain, from the perspective of output value, PCB is currently the most widely used in the field of communication, computer (IDC), and other traditional electrical insulation systems. According to WECC data, in recent years, communication accounts for the largest proportion of PCB Applications, more than 30%.

According to Primark, from 2017 to 2022, communication and automotive electronics are expected to replace consumer electronics and become a new driving force for the global PCB industry, with cagr5 of 3. 66% and 6. 43% respectively.

According to N. T. Information statistics, there are about 2800 PCB factories in the world, of which 116 are worth more than 100 million US dollars, mainly distributed in the US, Japan, Korea, mainland China, and Taiwan.

The proportion of Chinese PCB enterprises

According to Primark data, the PCB output value of mainland China increased from 15 billion 37 million US dollars in 2008 to the US $29 billion 732 million in 2017 over the past 10 years, and the compound annual growth rate was 7. 87% (2. 21% of global CAGR), and the growth rate of mainland China was obviously higher than that of the whole world. And it is predicted that the compound annual growth rate of China will exceed 3. 7% in 2017-2022, while that of developed regions such as the United States, Japan, and Europe is only about 1%. Global PCB production capacity will be further concentrated in China. 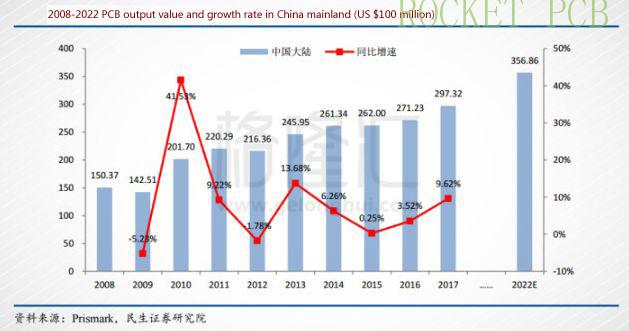 Overall, in the next few years, the growth rate of the PCB market in China is only 3. 7%, which seems not fast, and the cake is not very big. However, with the explosion of the new communication and automobile cycle, it is expected to replace consumer electronics. For example, in the field of base station PCB segmentation, the market space in the 5G era may be more than 4 times higher than that in the 4G era, and this field is pregnant with very good investment opportunities.

The first year of 5G

In June last year, the Ministry of industry and information technology of the People's Republic of China officially issued a commercial license, marking that 5G construction was six months ahead of schedule. Therefore, this year is also known as the first year of 5G. Compared with 4G, 5G has three obvious characteristics: low delay, high reliability, and high density. Just like this, in the field of base station PCB, there is a change of "quantity and price rise".

First, the number of base stations has increased 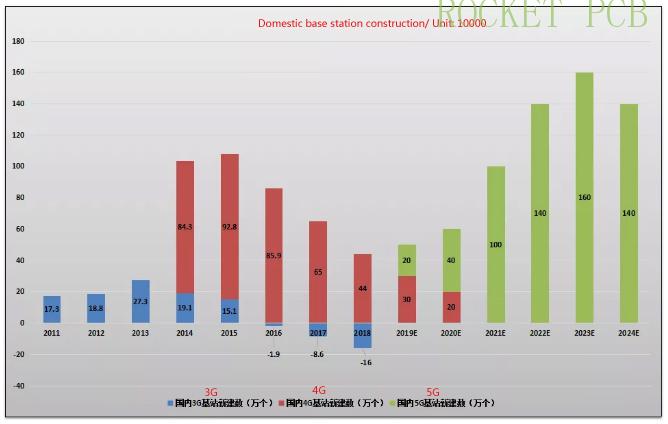 Second, the technical difficulty and PCB price are increased

5G requires higher and higher integration density on the circuit board, which has higher requirements on the number of layers, area, drilling accuracy, wiring, etc. of the PCB. In addition, the application proportion of high-frequency and high-speed materials is expected to significantly increase the unit price of PCB products.

Roughly, the market size of PCB in the 5G era will be more than four times that of 4G. The incremental cake is very big, and the leading enterprises in it will fully benefit.

Rocket PCB is able to closely integrate manufacturing, logistics, and PCB supply chain management. As a result, design, assembly, and product distribution can be done faster at a lower cost and without compromising our high-quality standards. We always put the best interests first when providing innovative solutions for manufacturing customers’ products. Welcome any kind of PCB orders, we will serve you wholeheartedly!  Contact us at sales@rocket-pcb.com.