Walking through a circuit board market, you will find Printed Circuit Boards of different colors ranging from blue, green, clear, black, purple, red, and white. Though these are the most common color-code in use today, the blue PCB often goes unnoticed amidst the rest in the PCB market. What causes this is as a result of its widespread use by industries.

This can raise some questions about the blue PCB. Why the high popularity of blue PCB? Does that mean the color improves any feature of the circuit board?

Interestingly, there are no visible differences between the PCBs of other colors and the blue PCB apart from the different states of their physical appearance in which the blue PCBs are more bright and attractive.

But in addition to the brightness of the blue color that engineers fell in love with, we dug up other reasons for the regular use of blue color for PCB.

What do Blue Printed Circuit Boards Do?

Like every other printed circuit board, blue PCBs are the base of all electronic devices. They contain essential electronics components such as resistors, insulators, etc. that are necessary for the electronics operation compounded in a single functional hardware.

All the data, electrical connections, and mechanical support needed by the device are derived through the pathways on the board.

However, they possess a blue outlook. This visible characteristic is not associated with any color or dye that is added to the PCB but is formed as a result of their similar nature to the solder mask. It is similar to Arduino blue. This solder mask is the protector of the copper wire on board and is the same as the blue color appearance of the board.

Furthermore, there are some unique features associated with the blue PCB. Such as the magnification of the solder mask. This feature dramatically helps engineers to notice defects during manufacturing.

Also, they possess shallow contrast between the empty spaces and places.

Generally, when producing electronic devices with complicated circuits such as RC robots or gaming devices, blue PCBs are mainly used.

Another feature is that they allow connections between devices and the board. The board and physical components of the electronics are soldered using metal, so electrical transmissions can easily pass through, and the elements can stick together

The solder is visible on a blue PCB surface for easy removal and detection when the need arises.

NOTE: The blue PCB is relatively more expensive than other PCBs. Their unavailability to some extent, causes this. 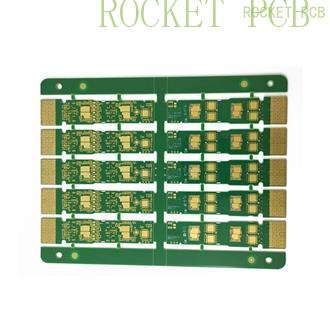 The convenience of this PCB to manufacturers and its usefulness makes it applicable to so many industries. Such as:

The compositions of the blue PCB are divided into four sections. The sections are summed to one in the form of layers bonded by heat and adhesive to a single hardware component.

Here are details of the sections that form the composition below:

The substrate is the primary or base layer of the blue printed circuit board. This substrate usually determines the rigidity, flexibility, toughness, and thickness of the blue PCB.

The recommended material usually used for the substrate is blue fiberglass, also called an FR4.

Typically, the standard thickness for a blue PCB ranges from 0.8mm to 1.6mm. However, custom requirements might make these values shift depending on the context. Examples of operations requiring customizable blue PCBs are RC robots or gaming equipment.

Some other materials are used for the substrate layer of blue PCB. They are flexible-high temperature plastic (for flexible blue PCB), phenolics, or epoxy resin. The phenolics and epoxy resin are substandard and less expensive than the blue fiberglass. They are primarily used in low-quality electronics.

To differentiate the fiberglass PCB from the other materials (phenolics or epoxy) is a crucial thing to do as the latter can harm your entire product. When you solder an epoxy and phenolic PCB, an awful smell arises.

The amount of sides the copper is placed on determines the recognition of the blue PCB. A two-sided blue PCB is one where the substrate has copper on both sides. Usually, low-graded devices contain copper on one side of the substrate in their PCB.

Depending on context and requirements, some blue PCBs can have more than two copper sides.

Ounce per square foot is used to measure the thickness of the copper by weight.

Generally, blue PCB should have one ounce per square foot of copper, but in cases of custom provisions, this value may shoot up to two or more.

This is the next section after the copper layer. It is laid on top of the copper thin foil. This layer is essential to direct soldering in the proper direction and also prevents jumps. Also, it helps shield copper from contact with other metals.

In some cases, the PCB color is determined by the color of the layer. But unlike them, that feature is absent in this case since the PCB is already blue.

The solder mask can either be blue or transparent.

The silkscreen can be seen as the cover layer of the blue PCB. It is the last and is placed over the solder mask layer. In conventional PCBs, the silkscreen is white in color. However, in the case of blue PCB, it is white and black, strictly adhered to prevent color mixing on the board.

The primary purpose of the silkscreen is for pieces of information about the components placed on the board. Depending on the manufacturer and purpose, the name, symbol, or use of the component is written right under it to aid consumers.

The variety of blue PCBs available have their distinct nature and uses. Let's break them down below:

This type of blue PCB has a substrate with a copper foil layer on just one of its sides as mentioned above.

They are applicable in a lot of forms, such as:

Similarly, this type of blue PCB has copper foil on double layers of the blue substrate. Interconnected holes are made for both layers.

They are applicable in:

In custom cases, more than two sides are layered. Up to fifty sides can be obtained in some PCBs.

They are used for:

These types are made in a powerful way to keep them together and durable while they are used in devices. They possess a very rigid base.

They can take a single layer, double layer, or multi-layer.

As the name suggests, they are flexible. This means they survive twirling and bending according to the device.

Compared to another color PCB, the blue PCBs, the contract space between the planes and empty spaces is shallow, as mentioned above.

The solder mask in the blue PCB requires magnifications, and defects are seen.

All these are what separate a blue PCB from a conventional one, else; they are similar.

However, the blue PCB is more attractive and futuristic because of how components are placed on the surface.

Blue PCBs are constantly used in today's world because they meet modern standards.

For a high-quality blue PCB for your business and credible advice on the best way to go about your brilliant ideas, contact Rocket PCB for more details.

With our state-of-the-art PCB manufacturing machines, we have satisfied clients globally for years. Our engineers have substantial experience in producing blue PCBs year in and out.