Analysis of back drilling PCB

Analysis of back drilling PCB

PCB Engineers who do hardware know that the design of PCB vias is actually very particular.  Today, I want to share the technical knowledge of via hole and back drilling in PCB.

Via hole in PCB is mainly composed of hole, pad area around hole and power layer isolation area

1. The influence of vias in high speed PCB

In high-speed PCB multi-layer board, signal transmission from one layer of interconnect to another layer needs to be connected via vias.  When the frequency is lower than 1GHz, vias can play a good role in connection, and its parasitic capacitance and inductance can be ignored.

When the frequency is higher than 1 GHz, the parasitic effect of vias on signal integrity can not be ignored.  At this time, vias show as discontinuities of impedance in the transmission path, which will cause signal integrity problems such as reflection, delay, attenuation, etc.

Via holes are generally divided into three categories: through holes, blind holes and buried holes. 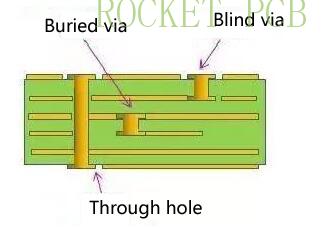 In the design of high-speed PCB, the seemingly simple vias often bring a lot of negative effects to the circuit design. In order to reduce the adverse effects caused by the parasitic effect of vias, we can try our best to:

(3) As far as possible, the signal wiring on the PCB shall not be changed, that is to say, the vias shall be minimized;

(5) The pins of the power supply and the ground should be close to the vias.  The shorter the lead between the vias and the pins, the better, because they will increase the inductance. At the same time, the power and ground leads should be as thick as possible to reduce the impedance;

(6) Place some grounding vias near the vias of the signal exchange layer to provide a short-distance circuit for the signal.

In addition, the length of via is also one of the main factors that affect the inductance of via. For vias used for top and bottom conduction, the length of vias is equal to the thickness of PCB.  Due to the increasing number of layers of PCB, the thickness of PCB is often more than 5mm. However, in the design of high speed PCB, in order to reduce the problems caused by vias, the length of vias is generally controlled within 2. 0mm. For vias with a length greater than 2. 0 mm, the impedance continuity of vias can be improved to some extent by increasing the vias size. When the via-hole length is 1. 0mm or less, the best via-hole diameter is 0. 20mm ~ 0. 30mm.

Back drilling technology in PCB production

Back drilling is actually a special kind of deep drilling.  In the production of multilayer PCB, such as the production of 12 layer PCB, we need to connect the first layer to the ninth layer, usually, we drill via holes (once drilled) and then electroless copper.  In this way, the first layer is directly connected to the 12th layer.  In fact, we only need to connect the first layer to the 9th layer.  As there is no line connection between the 10th layer and the 12th layer, it is like a column. 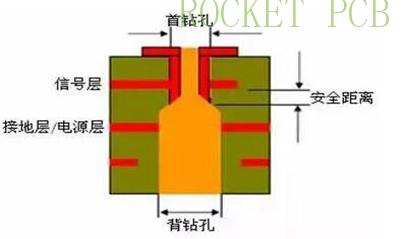 This column affects the signal path, which will cause signal integrity problems in communication signals. So the redundant column (stub) is drilled out from the opposite side (secondary drilling). So it's called back drilling, but generally it is not so clean, because the subsequent process will electrolyze a little copper, and the drill point itself is also sharp. So PCB manufacturers will leave a little bit.  The length of this stub is called B value, which is generally in the range of 50-150um.

2. What are the advantages of back drilling?

3）The thickness of local board becomes smaller;

4）Reduce the use of buried blind holes and reduce the difficulty of PCB manufacturing.

3. What is the function of back drilling?

4. Working principle of back drilling production 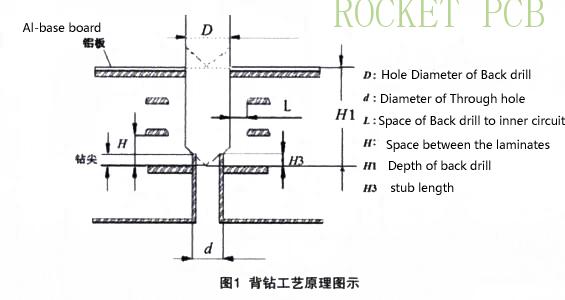 b.  The PCB after drilling is electroplated, and the positioning hole is subject to dry film sealing treatment before electroplating;

c.  Making the outer layer figure on the electroplated PCB;

6. What are the technical characteristics of back drilling board?

1）Most backplanes are hard

7）The outer circuit is less, and most of them are designed by crimping hole array

8) The back hole is usually 0. 2mm larger than the hole to be drilled out

10） If back drilling requires drilling to layer M, the medium thickness from layer M to layer M-1 (the next layer of layer M) shall be at least 0. 17MM

7. What is the main application field of back drilling board?