The difference between copper core PCB and aluminum PCB

The difference between copper core PCB and aluminum PCB

Printed circuit board made of aluminum core materials are referred to as aluminum PCB, and due to their powerful heat dissipation capabilities, such boards are commonly found in LED lighting products. There are two sides on the front and back. The white side is soldered to the LED pins and the other side is in aluminum form. Typically, a thermally conductive paste is applied and then contacted at the thermally conductive portion.

The aluminum substrate is a metal-based copper clad laminate having a good heat dissipation function. Typically, a single sided aluminum PCB consists of a three layer structure, which is a circuit layer, an insulating layer and a metal base layer. Also used for high-end applications designed as double-sided, the structure is circuit layer, insulation layer, aluminum base, insulation layer, circuit layer. A very small number of applications are multi-layer boards, which can be made up of ordinary multi-layer boards combined with an insulating layer and an aluminum substrate. 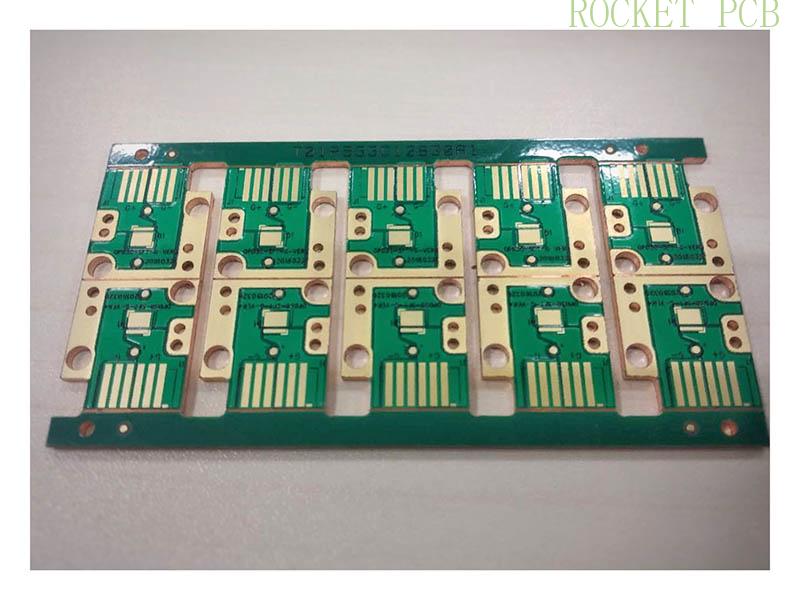 The circuit layer is etched to form a printed circuit for assembly and connection of the device. Compared to the conventional FR-4, the same thickness and the same line width allow the aluminum substrate to carry higher currents. Reduce product size, reduce hardware and assembly costs; suitable for surface mount SMT process of power components.

However, aluminum PCB cannot be used as PTH holes. In the era of 4G network, RF signals require excellent grounding performance, and heat dissipation requirements will be greatly improved. Aluminum substrates are not useful, so copper based PCB can be considered.

The copper based circuit printed board is the most expensive one of the metal substrates, and its heat conduction effect is many times better than that of the aluminum substrate and the iron substrate. It is suitable for high-frequency circuits and regions with high and low temperature variations and the heat dissipation and architectural decoration industries of precision communication equipment.

In general, the surface finished of the copper based circuit printed board is immersion gold, silver plating, HAL, OSP, and the like.

The circuit layer of copper core PCB is required to have a large current carrying capacity, so that a thick copper foil should be used, and the thickness is generally 35 μm to 280 μm;The thermally conductive insulating layer is the core technology of the copper base PCB. The core thermally conductive component consists of a mixture of alumina and silicon powder and epoxy resin. The thermal resistance is small (0.15), the viscoelasticity is excellent, and heat aging resistance is obtained. Capable of withstanding mechanical and thermal stresses.

The metal base layer is a supporting member of the copper PCB, and is required to have high thermal conductivity, generally a copper base PCB, which is suitable for conventional mechanical processing such as drilling, punching  and cutting, and the metal layer mainly functions as heat dissipation, shielding, covering or grounding. Due to the difference in copper and aluminum properties and the corresponding PCB processability, copper base pcb have more performance advantages than aluminum core PCB.

2.the copper base can be processed into metallized holes, and the aluminum base is not allowed. The network of metallized holes must be the same network, so that the signal has good grounding performance, and secondly, the copper itself has weldability, so that the structural parts of the design are finally finished. Mounting is optional.

The copper base of the copper substrate can be etched into a fine pattern and processed into a boss shape, and the components can be directly attached to the boss to achieve excellent grounding and heat dissipation effects;

Due to the difference in elastic modulus between copper and aluminum, the corresponding warpage and shrinkage of the copper substrate will be smaller than that of the aluminum substrate, and the overall performance is better. stable.